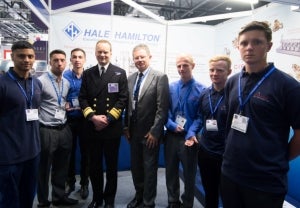 Hale Hamilton, the London-based specialist engineering and manufacturing company, has celebrated the success of its engineering apprenticeship scheme by making awards to two teams of apprentices at DSEi 2013 and launching a new, dedicated apprentice training centre at its facility in Uxbridge.

Every year, Hale Hamilton takes on at least three apprentices from schools close to its Uxbridge site, giving them a four-year work-based training programme that provides an opportunity to gain knowledge, skills and competence in mechanical engineering. Most of their time is spent in the workplace, doing real work with other Hale Hamilton employees. The work is paid and leads to an industry-recognised qualification such as Key Skills, NVQ and BTech in mechanical engineering.

The Apprentice Challenge Awards are being presented in recognition of the success of two teams of apprentices in rising to the challenge of designing and constructing a model warship and submarine, using only scrap materials from the factory, within a budget of £500 and within 200 hours. Each team chose a naval subject for their model as this is representative of one business sector in which Hale Hamilton operates. The models were displayed at DSEi 2013 on stand S9-493 in the Naval Zone, adjacent to the naval theatre.

To support the continued growth and success of the Apprentice Scheme for young engineers, Hale Hamilton has also launched a new dedicated Apprentice Training Centre at its facility in Uxbridge, making this one of the largest SME Engineering Apprenticeships in the UK.

Hale Hamilton is part of the Circor International group of companies and is a leading provider of high-performance, high pressure valves and valve systems for fluid and gas control solutions. Applications are delivered for defence, power generation, offshore oil and gas, pharmaceutical and other industry sectors. All Hale Hamilton products are designed and manufactured in the UK at Uxbridge, London, using the latest manufacturing techniques and facilities. The Apprentice Scheme plays a critical role in securing the correct skills for the Uxbridge facility.

Sales dirctor Bill Dormer, who is responsible for defence business at Hale Hamilton, commented: "Our modern apprenticeship in engineering is absolutely crucial in attracting young people into our business. It helps to sustain our manufacturing and skills base and plays a key role in helping to improve and maintain core engineering skills in British industry. The apprentices develop skills for life and most will move on to full time employment with us once their apprenticeship has been completed."

Hale Hamilton MD Allan Goodbrand said: "The Apprentice Challenge was extremely successful and the apprentices have created ingenious and creative models using many of the skills and techniques they have learnt during their training. Rear Admiral Parker is presenting each team with an award to recognise their skills and achievement. Congratulations to all of the successful apprentices."

Hale Hamilton is a leader in the design, manufacture, supply and support of high performance fluid control equipment, designed to perform under critical conditions of...