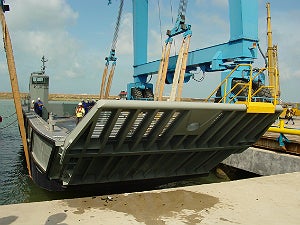 Navantia has set afloat the first of the series of twelve fast landing crafts that the company is building for the Royal Australian Navy.

The design of these ships is based on the ones built by Navantia for the Spanish Navy and commissioned from 2006 to 2008.

The contract, signed in December 2011, includes the total construction by Navantia in the Bay of Cádiz, and means a workforce of 350,000 hours.

The landing crafts are destined to operate with the ALHD "Canberra" and ALHD "Adelaide", strategic projection ships, similar to LHD "Juan Carlos I", also built by Navantia.

Commissioning of the four first units is scheduled for April 2014.

Australia is a strategic country for Navantia, regarding the number of naval programmes, where Navantia presents as a solid and safe option.

Recently, Navantia has created Navantia Australia Pty, as a proof of our commitment in the country.