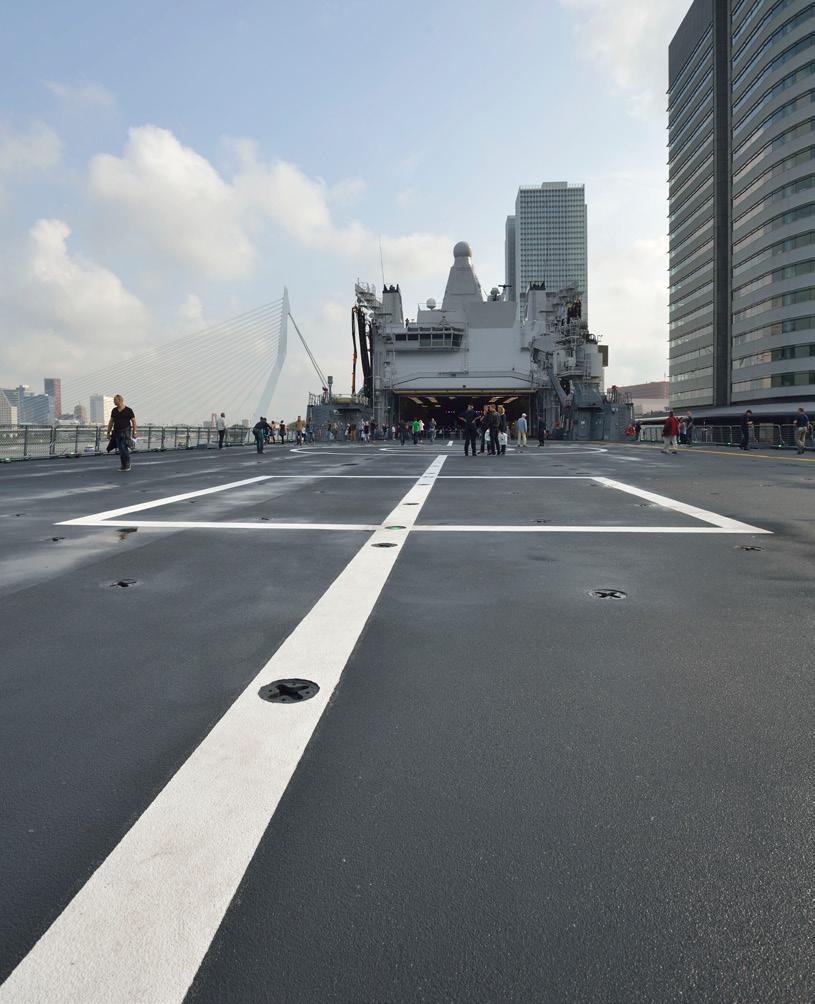 The JSS Karel Doorman is the impressive new vessel of the Royal Netherlands Navy (RNLN). During the World Harbour Days in Rotterdam, the ship was the absolute top attraction. It is easy to see why, as the Karel Doorman has been built with unique capabilities, which will enable the ship to add value not only to the Dutch armed forces, but also to Nato and the EU.

Showpiece of the Royal Netherlands Navy

The Karel Doorman has been fitted out by Damen Shipyards in Vlissingen and is more than 204 metres long with a beam of more than 30m. The ship has a displacement of 27,800t, which will make the JSS Karel Doorman the largest vessel in the RNLN fleet. Manufacturing the ship was therefore a project of vast proportions. In collaboration with master builder Damen Shipyards and the RNLN, Bolidt installed the decking on this Joint Support Ship.

Over the years, Bolidt has proven to be a good partner when it comes to the installation of marine decking. Besides carrying out orders for the Dutch Navy, Bolidt also works on vessels of the French, Moroccan and Indonesian Navies. This project involved work in both Romania and the Netherlands. In total, about 18,000m² of Bolidt marine decking has been installed on the JSS Karel Doorman.

The Bolideck® systems used are of course specially suited for marine applications. The exterior decking is suitable for heavy loads, for example. The decking is wear resistant and has been finished with a strong non-slip coating. Because of its flexible composition, the decking is able to accommodate movement in the steel deck. Like the exterior decking, the helicopter deck can withstand the loads of heavy equipment and it is large enough to carry two new generation naval helicopters, such as the NH90 and the Chinook. The interior decks have been covered with a variety of Bolideck® systems, ranging from light-weight material to sound-damping and fire-retardant flooring systems. Besides this, all recreation areas, cabins and equipment rooms were finished with maintenance-friendly Bolideck® systems.

As the ship will be mainly used for replenishment at sea (RAS), it has two RAS masts. The ship also features an Integrated Mast 400, which houses virtually all the sensor systems. In addition, the JSS Karel Doorman has the capability to perform helicopter in-flight refuelling (HIFR). The ship can also be used for other purposes. The presence of two landing platforms for naval helicopters contributes to its versatility. "The JJS Karel Doorman can be deployed in anti-piracy missions", according to commander Van Den Berg. "But also for counter narcotics operations in the Caribbean, for instance."

In 2015, when the ship will be officially commissioned into the RNLN fleet, it will become the HNLMS Karel Doorman.

In the offshore industry, safety is paramount. On construction vessel Aegir, which belongs to the...