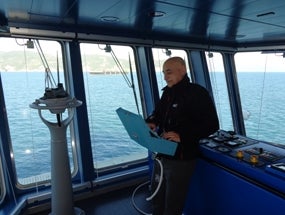 The system was installed in retrofit during the end of the warranty activities, and after having brilliantly passed the demanding sea trials, it is now fully operating, helping the challenging missions of the Italian Coast Guard.

The supplied DP system, SEAS-DPS, is the final product of a research program conducted within the national research project ‘CLUSTER’ in cooperation with Fincantieri’s Naval Business Unit, its Research Centre CETENA and several departments of the University of Genoa, among which the Department of Naval, Electric, Electronic and Telecommunication Engineering (DITEN), with the support of the Ligurian District of Marine Technologies (DLTM).

The scope of supply consists of a main operator station integrated in the bridge consoles with a 19in touch screen, a functional keyboard and a three-axis two-levers joystick, a portable console that replicates in small-scale the operator station with a 10in touch monitor and three plug-in stations at the bridge wings and the aft wing.

The core of the system is the SEAS-DPS controller, installed in a dedicated cabinet at the back of the wheel house and interfaced with the propulsion system, the steering system, the bow-thruster and the navigation sensors for position / heading reference and wind conditions.

The DP Controller HW is the same used for the Integrated Platform Management System (IPMS) supplied by Seastema for these Ships, with clear benefits in terms of system integrations and life-cycle maintenance costs. The DP cabinet was already designed to allow upgrading to DP2.

The control algorithms, entirely designed and developed by Seastema, have a logic structured on several levels in order to ensure flexibility, modularity and scalability. This means that additional features / functions (such as Auto-Pilot, Track-Pilot and Speed-Pilot) can be implemented in the system without altering the Software’s core architecture.

The flexibility of this design is evidenced by the fact that the DP system was retrofitted on the two ships after delivery without needing extensive refitting work.

Thanks to its robust and efficient control algorithms, tested and tuned with a built in real time simulator, SEAS-DPS is able to provide good station and track-keeping performances up to Sea State 4, with a conventional shaft propulsion configuration.

SEASTactics is the new edge of whole ship integration for patrol vessels and for units...

Seastema has obtained the MED/4.16 Type Approval Certificate of Conformity of its SEAS-PILOT HCS autopilot...

SEASTEMA and HANWHA SYSTEMS have delivered the SEASNavy Engineering Control System (ECS) on the first...