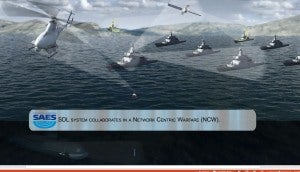 SAES will present at the 2014 Undersea Defense Technology (UDT) Conference a paper about ASW systems solutions that meet with the new necessities of ASW missions.

The emergence of new military technologies has dramatically affected the traditional concept of operation of anti submarine warfare missions (ASW). Modern submarines have technological advances in enhanced propulsion, quieting techniques and coordinated weapons technologies. In addition to this, new geopolitical scenarios in the world constrain naval forces involved in the ASW missions to the littoral waters.

In this new ASW context, and with the objective to continue at the forefront of the ASW systems, in the year 2004 SAES assumed the challenge of design and manufacturing a system capable to participate in these new ASW missions: Sensor Data Link (SDL) system.

Additionally the SDL system collaborates in a network centric warfare (NCW), allowing the centralisation of analysis and taking decisions, providing: