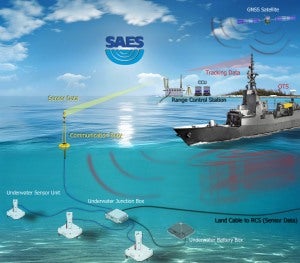 The study, entitled "Main characteristics of the MIRS measured electric and magnetic underwater radiations emitted by cruise ships in the Mediterranean Sea", is based on data collected during a period of four months with the SAES’ manufactured last generation Multi-influence Range System (MIRS), which configures as one of the most advanced equipment in its class.

Nowadays there exists an increasing concern in the international community of the effects on marine life on the acoustics and non-acoustic underwater radiations, as reflected in the Marine Strategy Framework Directive (MSFD) of the European Union (EU). Additionally, there is in this field an important lack of information on the characteristics of non-acoustic radiations from specific types of vessels.

In order to mitigate this lack of information, SAES is developing a series of studies on the radiation generated by vessels, and specifically their magnetic and electric emissions, since their impact is much less known than those produced by acoustic radiations. The first results of the studies, centered on cruise ships measurements, will be explained in depth in the MAST EurAsia 2014 Conference, on Wednesday 21st May at 8:30am (Session 5C).

SAES has analysed the underwater electric and magnetic fields generated by a type of vessels increasingly present in the seas and oceans: the cruise ships. These analyses are based on the data captured by the SAES’ manufactured Multi-Influence Range System (MIRS), deployed during a period of several months in the area of Cartagena to evaluate if the measured levels could impact in marine fauna in the area, following guidelines of the MSFD.

Measured values show that magnetic and electric field levels increase by the cruise ship’s influence, in a much higher degree in the case of the electric field than in the magnetic one. As a result, the detected levels clearly recommend that further specific studies are needed to determine possible influences on the marine fauna and propose specific actions to regulate the electromagnetic radiated fields if necessary.

In this sense, SAES is promoting the development of the USMA program (Underwater Signature Monitoring and Analysis Centre) within the European framework program Horizonte2020 as it would be an essential tool for the effective implementation of the EU Marine Strategy.

The SAES Multi Influence Range System (MIRS) for surface vessels and submarines provides real influence measures (magnetic, electric, pressure, acoustic, and seismic) in a real and controlled scenario, to successfully counter related threats. MIRS is among the best systems in the world in its class and compared to fixed stations. A decisive advantage of the MIRS system is that, due to its portability, low weight, low power consumption and high performance, can obtain all signatures of the ship in different geographical locations.

MIRS is also a tool for testing and calibration of:

For more information regarding MIRS or other SAES products, staff will be on hand to assist with any questions MAST Exhibition in Istanbul from 20th to 22nd May 2014, stand number 82.