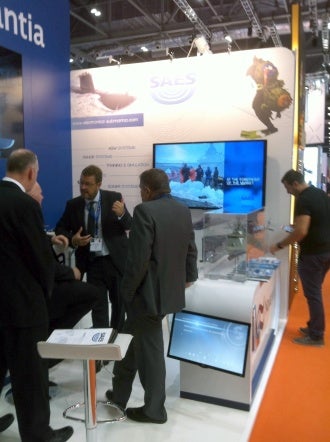 SAES, referent in Spain in underwater acoustics and electronics, is attending DSEI in a favourable environment.

"SAES, as specialist in underwater electronics, has a wide range of systems at the forefront of the market in those areas."

SAES is getting numerous visits from local and foreign official delegations, as well as companies interested in their products to establish partnerships that will achieve greater success. In fact, the joint participation with Navantia at the fair it is a way to exploit the synergies between these two major Spanish companies.

At Sonar area, the high-frequency active sonar ‘DDS-03 (intruder detection sonar)’ has caught the interest of participants since allow the underwater surveillance and protection of critical facilities as ports and refineries.

This kind of systems are being required by a growing number of countries because they are an efficient protection systems against asymmetric threats, which are being taking into account, increasingly, in the strategies of defence of the countries.

Head of the sonar commercial line said: "Our system can cover large areas and allows the processing of up to ten sonar and also can be integrated into any surveillance system together to others sensors and systems.

"Furthermore, DDS offers additional capabilities such as the wireless communication and the training."

In the modern ASW framework, which variety of platforms (frigates, corvets, helos, UAVs) collaborate in a Network Centric Warfare (NCW) to interchange information, is mandatory the use of systems that allows the centralised managing of this and the quickly decision-making.

Head of ASW commercial line said: "The ROASW system, developed by SAES and based on the acoustic processing of sonobuoys, is the perfect solution to manage this kind of ASW mission since it constitutes a unique, fully integrated ship / air weapon solution that allow to make decisions in a quick and agile centralised way, and the communication of tactical data and acoustic by surface-to-surface (S2S), surface-to-helo (S2H) and surface -to-satellite (SATCOM)."

In fact, the Swedish Royal Navy has equipped their Visby class corvettes and the HKP-15 helicopters with the ROASW system (formerly known as SDL).

SAES, as an expert at the measuring and control of underwater signatures (acoustic, sismica, magnetic, electric and pressure), develops systems for Underwater SIGINT as MIRS (multi-influence range system), as well as naval mines (MINEA-multi-influence naval mines), both exercise and combat versions.

The exercise mine can be used, in addition to training at MCM, to gather intelligence information by measurement and recording of ships influence signatures.

The easy integration of its systems and the experience in important international programmes are some of the keys characteristics highlighted by SAES that provide them the opportunity to work for numerous navies worldwide.