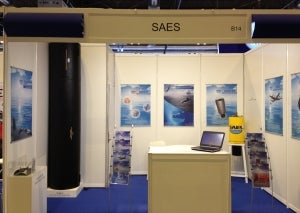 SAES received numerous national and international visitors, such as delegations from Malaya and Turkey who spoke with SAES experts about safety in the marine environment.

The defence of port security and critical infrastructure generated particular interest at the event. This highlights the increasing awareness on the part of those involved in defence, and the need to understand more deeply the particularities that security and defence in the underwater environment involve in countries like Spain, which have a large maritime extension where constructions are strategically located: military and commercial ports, refineries, power generating stations of international companies, etc.

In addition, environmental safety and other threats to the national heritage (spoliation of wrecks) must also be considered.

SAES has several developments and products in the field of diver’s detection and measurement systems of ship signatures.

The Intruder Detection Sonar is an high-frequency active sonar specifically designed to detect underwater threats such as divers and underwater vehicles both manned and unmanned. SAES has developed this system given the growing international interest in relation to the protection of ports, ships and critical infrastructures against underwater threats. The sensors, highly specialised, are characterised by high probability of detection and low false alarm probability.

In a modern naval operations environment, surface ships and submarines are subject to numerous threats of detection due to the influence of their signatures.

To successfully counter the threats, each influence (magnetic, electrical, seismic and acoustic pressure) must be measured and analysed to know with precision the ship signature in order to estimate the potential threats.

The signature measurement system for surface ships and submarines developed by SAES, MIRS, provides actual measurements of the influences of a ship in a real and controlled scenario.

SAES was visited by the Colombian Defence Minister Juan Carlos Pinzon, in addition to other important members of the Colombian defence sector.

For more information about any of the products mentioned above, please contact SAES.