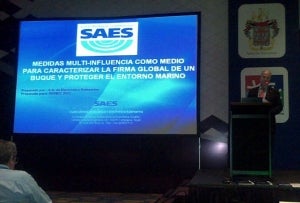 The products that are arousing interest in the South American country are measuring systems and control of multi-influence signatures. SAES has two outstanding products in this area: MIRS and ONMS.

The Multi-influence Range System – MIRS – developed by SAES provides actual measurements of the influences of a ship (magnetic, pressure, electric, acoustic and seismic) in a real and controlled environment. This allows success counteraction of threats based on the detection of such influences.

The main objective of the ONMS onboard system, installed on submarines of the Spanish Navy, is the real-time knowledge of acoustic and vibration signatures of the ship by using analysis tools to identify the sources of noise in the ship and to generate alarms when exceeding a threshold level, among other system functions, such as cavitation alarms, own noise cancellation and training on board.

The products in the field of naval mines were also subject of consultation. In this field, SAES offers the most advanced manufacturing naval mines today: MINEA and MILA. MINEA mines, training or combat version, are fitted with sensors to detect electrical, pressure, acoustic and seismic influence and with counterdetection mechanisms. MILA is a smart type underwater limpet mine that incorporates a computer-controlled detonation.

The sales and marketing manager of the company, Adolfo Hernandez, was invited to give a lecture entitled ‘Measures multi-influence as a way to characterize the global signature of a ship and protect the marine environment’, because of the significant interest generated in the South American country and leveraging the vast experience of SAES in this field.

This conference, aimed at the Armed Forces, the Security Corps of the State, defence sector companies, institutions and the media, led a discussion on the importance of security against submarine threats in the Colombian waters and coast, especially regarding the placement of strategic buildings such as military and commercial ports, refineries, power generating stations of international companies, etc. SAES explained its experience and products in the field of multi-influence measures, and their usefulness in maritime security.