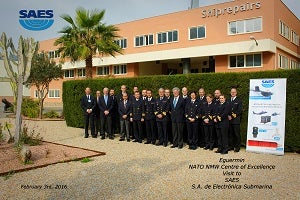 A delegation of the EGUERMIN has visited the headquarters of SAES (S.A. de Electrónica Submarina) in Cartagena, Spain, this week. EGUERMIN started as a Belgian-Netherlands Naval Mine Warfare school in 1965 and since 2006, EGUERMIN is the Nato Naval Mine Warfare Centre of Excellence (NMW COE).

A total of 13 members of EGUERMIN pertaining to several countries (Belgium, Netherlands, Canada, Denmark, Italy, Latvia and Poland) and a liaison officer from the Spanish Navy composed delegation.

SAES is specialised in underwater technology and world renown in the naval mine warfare and underwater ranging systems, the company business line where is positioned at the forefront of the market. During the visit, EGUERMINE officers also visited SAES workshop facilities at La Palma, where they were able to see MINEA (multi-influence naval mine), MILA (limpet mine) and MIRS products under production.

The most advanced multi-influence naval mines, MINEA comprise several types of mines (moored, shallow water and cylindrical bottom) both in combat and exercise versions. MINEA naval mines are equipped with sensors for detection and processing of the magnetic, electric, pressure, acoustic and seismic signatures. MINEA Exercise version are available for training purposes and gathering intelligence information through the measuring and recording of ship signatures.

MILA is a smart limpet mine that incorporates a detonation system controlled by a computer. Can be attached to the hull by a diver or be used as a demolition charge. Its conical shape and low weight in water endow the mine with a low hydrodynamic resistance being easy to carry by divers.