BMT is looking into solutions to integrate AI and intelligent system (IS) into a naval ship design to process vast amount of data and feed relevant information to the crew. Being better informed will accelerate the decision-making process on the ship.

The company has a vision for the 2040 timeframe and beyond, but the concept is not about complete automation. The project is seeking solutions that reduce the number of people who need to be in a high-threat environment and have a balance of autonomy and human users. This concept is called lean-crewed.

Automate or not to automate

Research and development lead at BMT Jake Rigby simplifies: “We want to keep humans doing what they’re really good at and let computers do what they are better at doing and focus on how we can pair these elements.” But removing crew from vessels entirely may not be an option just yet.

“We don’t see that [complete automation] happening in the near future. There is also the understanding of the ethical aspects of warships operating autonomously, whether that’s defending themselves or choosing whether to engage in fights. There is a huge hurdle to overcome in terms of trust of the supervisory systems,” BMT’s chief engineer Ian Savage tells Global Defence Technology. 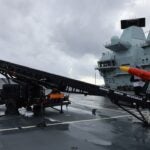 There is work going on the backgrounds and BMT is addressing these issues. But these processes can take time, and the company thinks it is important that systems that enable at least partial automation are being integrated.

BMT believes that transitioning towards a highly autonomous, lean crewed concept can provide improved operational capabilities while retaining asset flexibility by keeping a limited number of highly skilled personnel on board.

With autonomy, there is a potential of reducing the through-life cost of the platform and increasing reaction time. Rigby explains: “If we look at hypersonic missiles or other new threats, a computer can pick out and track those things better than a human can.”

Removing personnel from direct line of fire is another important aspect. “It can improve their quality of life and increase retention rates because they could do some of the roles onshore rather than having to necessarily always be on the vessel,” he continues.

In this future concept, there is no regular bridge on the vessel. The company thinks the navigation function can be performed, using electro-optical sensors, from a virtual steering position in a combined operations room and bridge deeper inside the ship.

This concept reduces the number of personnel on board, keeps them safer and frees up topside real-estate for weapons, communication equipment and sensors. Less personnel translate into lower operational costs and longer endurance.

Operating a vessel in the theatre without personnel onboard poses potential limitations and dangers. If a scenario emerges that is not programmed into the computer, adapting the system to the new threat might be too lengthy or difficult. Having an optimised presence also means missions are capable of operating in GPS denied areas, and need not rely so heavily on spoofed and jammed satellite connections, making ships less susceptible to pirate attacks.

The navigation function would be performed, using electro-optical sensors, from a virtual steering position in a combined operations room and bridge deeper inside the ship. Credit: BMT

BMT technical experts identified and split the project into several key development areas. The recoverability aspect of the work focuses on the abilities that enable a lean crewed vessel to respond during damage control scenarios swiftly and flexibly.

Damage control traditionally relies on people led firefighting, flood control and repair. These responsibilities can be difficult to automate. Savage, however, sees it as an opportunity: “We can integrate robust system design with the ability to reconfigure itself on the damaged conditions. But that also links into platform systems and potentially maintenance and logistics,” he says.

The vision is about finding ways of pulling works together from across different areas. Savage believes functional requirements need to be integrated with other shipboard functions, such as video oil mist and fire detection as part of the CCTV system, or fuel system pressure monitoring linked to pre-fire alarms. Situational awareness, therefore, would enhance the crew’s ability to focus on various aspects of the operation.

Savage explains: “Because system monitoring gives you the ability to understand your system’s state under damaged conditions as well, those same sensors then provide you with potential real-time condition-based monitoring.

“You could do this from a facility ashore, onboard or both and allowing you to plan that kind of maintenance schedule around a specific port stop.”

Another focus area of the project is on the platform systems. BMT is looking into abilities for vessels to conduct some of their husbandry, maintenance and inspection autonomously. For instance, identifying and stopping leaks, reconfiguring according to a situation or reducing husbandry. But to get to those high levels of reliability, design principles, equipment selection, installation and commissioning practices will need to be maximised.

As the intelligent system is across the ship create new digital interfaces and information sources that help the crew operate more efficiently, the very same systems invariably increase the threat surface area from a cybersecurity perspective.

By definition, the secure by design approach would ensure that cybersecurity principles are addressed at an early stage in the design.

Rigby claims the company is taking a new approach to solving this issue. “What we’ve tried to on cybersecurity is take a blank canvas, forget everything that we know about how networks are designed on warships today, and thought, ‘How could we design this system to be fully secure by design, and operated security as well’,” he concludes.