In recent years, shallow-water littoral zones have become an increasingly important consideration for the world’s naval forces. The threat of piracy in regions like the Gulf of Aden along the Somali coast is the most high-profile example of this shift to the shallows, but modern navies are also aware of the potential for terrorist incursion and smuggling in these zones, as well as day-to-day border patrol operations and preparation for more conventional naval threats.

But with so much coastline to cover, especially in a huge country like the US, there’s only so much that manned platforms like littoral combat ships and submarines can accomplish.

Back in 2005, the US Navy’s Office of Naval Research (ONR), along with the Defense Advanced Research Projects Agency (DARPA) began work on developing such a system. The concept behind PLUSNet (persistent littoral undersea surveillance network) is to create a semi-autonomous controlled network of fixed bottom and mobile sensors, potentially mounted on intelligent unmanned underwater vehicles (UUVs) to keep a constant eye on littoral zones.

The M80 Stiletto is a prototype naval ship manufactured by the M Ship Company, to meet specific requirements of the Pentagon’s Office of Force Transformation.

Vehicles believed to be part of the network include several underwater gliders, the Bluefin-21 autonomous underwater vehicle (AUV) and the latest iteration of Pennsylvania State University’s (Penn State’s) Seahorse UUV.

This type of system has a precursor in the US Navy’s sound surveillance system (SOSUS), a series of fixed underwater hydrophonic arrays installed in the Atlantic and Pacific oceans in the mid-1950s to track submarine movements during the Cold War.

Meanwhile, trends in naval research are leading to a technological shift in underwater surveillance, moving from fixed sensor arrays to mobile platforms mounted on UUVs. "We’ll need to leverage technology and create a network of interconnected sensors with submarines as the hub of that network," said Vice Admiral Jay Donnelly, US Navy submarine force senior commander, at a Submarine League symposium in October 2010.

"We’ll use unmanned undersea vehicles and distributed netted sensors to serve to expand the sphere of influence that our submarines have, and will enable persistent presence in more areas of the world," Donnelly added.

PLUSNet, various elements of which have been contracted out to a number of US universities and naval research centres, could be the framework under which this networked web of underwater spy systems is eventually developed. Since the project was kicked off in 2005 with a $27.7m contract awarded to Penn State, there has been little information released about the initiative’s progress, although news emerged that the navy hoped the system could be operational by 2015.

Several glider platforms are being developed as part of the PLUSNet project, including the X-Ray advanced underwater glider, a prototype of the US Navy’s Liberdade series, a group of gliders aiming to achieve a range of 1,200-1,500km and on-station capabilities of up to six months in loitering glides at partial buoyancy.

Reputed to be the world’s largest underwater glider, X-Ray’s size is to its advantage in a surveillance role, as it can maximise its hydrodynamic efficiency, onboard energy storage and sensor payload.

Another advanced underwater glider that could form part of PLUSNet in a very different capacity is Seaglider. Primarily developed by the University of Washington’s Applied Physics Laboratory (APL) as an oceanographic data collection device, Seaglider is also a potent communications tool.

Typical AUVs likely to be included in PLUSNet include Bluefin Robotics’ Bluefin-21 Battlespace Preparation AUV (BPAUV), an autonomous vehicle already designed for the US Navy to carry out mine countermeasure missions in shallow water.

BPAUV’s advanced 455 kHz side scan sonar provides high resolution bathymetry and bottom classification data at ranges of up to 75 metres. The platform’s modular design (allowing sub-systems to be swapped out based on mission requirements) and ability to navigate without acoustic sensors make it a well-suited workhorse for littoral surveillance and anti-submarine warfare (ASW) roles.

Recent AUV developments have been pushing for even more intelligence in automated subsea systems, and in an underwater battle space there is more scope to build larger platforms to house a wider range of tech. Boeing’s Echo Ranger LDUUV (large displacement unmanned underwater vehicle) has not specifically been indicated for use as part of PLUSNet, but its development for the ONR and its impressive capabilities certainly mark it as a likely candidate.

The size of the five-ton Echo Ranger affords it space to incorporate more sophisticated automation, allowing it to traverse cluttered littoral waters autonomously using sonar. The system’s acoustic sensors also allow it to detect and identify approaching vessels from several miles away, giving it time to manoeuvre appropriately.

"In terms of autonomous operation, we’re pretty much there," said Mark Kosko, Boeing’s programme manager of unmanned undersea systems, at Defense Technology International at the beginning of April 2012. Future refinements of the technology include potentially installing diesel engines or fuel cells to prolong Echo Ranger’s current operating limit of 28 hours.

"Our original goal was to create a network of distributed sensors for detecting quiet submerged submarines in littoral waters where traditional ASW surveillance is challenged by complex sound propagation and high noise," said the programme’s principal investigator Professor Joseph Rice. 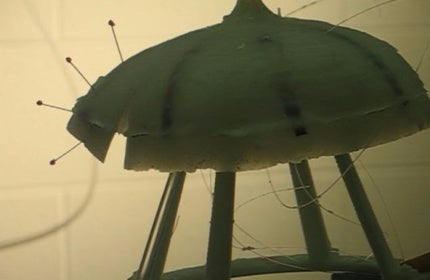 The humble jellyfish inspired a group of ONR-funded researchers at UT Dallas to create a platform which they dubbed ‘Robojelly’.

Although it’s clear that researchers like Rice and his team are perfectly capable of designing incredibly sophisticated automated surveillances devices under their own steam, an growing trend in underwater tech design (among other fields) is biomimetics, or taking inspiration from the most impeccable designer of all: nature.

Using biological evolution as a template, it’s possible to synthesise certain aspects of natural design to come up with concepts which would be almost impossible to conceive otherwise.

In the field of underwater stealth surveillance, the humble jellyfish’s perfect harmony with its environment has inspired a group of ONR-funded researchers at the University of Texas at Dallas (UT Dallas) to create a platform which they have playfully dubbed ‘Robojelly’, a robotic platform that mimics the moon jellyfish’s effortless movement to power itself with only hydrogen and oxygen – two gases that the ocean provides in abundance.

"We’ve created an underwater robot that doesn’t need batteries or electricity," said the study’s lead author Dr. Yonas Tadesse last month. "The only waste released as it travels is more water…It could stay underwater and refuel itself while it is performing surveillance."

This remarkable feat of self-sustaining energy is accomplished using synthetic ‘muscles’ wrapped in platinum-coated nanotubes that create heat and water vapours when exposed to hydrogen and oxygen. This heat causes the muscles to contract, pumping water and generating forward momentum. The next step for the technology, which has obvious applications for the long operating periods required by persistent surveillance, is to allow the legs of the device to move independently, unlocking the ability to travel in more than one direction.

It’s clear that enough innovative underwater technology exists to make each component of a PLUSNet-type system achievable today or in the near future. The challenge for the US Navy, and any other modern fleet considering a similar project, will be to bring all of these technologies together under one roof to create a unified system capable of maintaining a constant vigil below the waves.