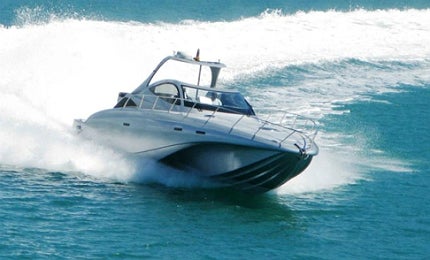 Technical analysts, policy advisors, strategic planners and even the media rallied around the key buzzwords of ‘anti-access / area denial’ (A2/AD), ‘hybrid warfare’ and ‘swarm tactics’, hyping up the situation. Despite using such niche terminology and increased discussion in the public domain, it is necessary to look beyond the IRGCN’s provocative rhetoric to evaluate such developments in their naval arsenal.

“Iran may well have the capabilities to replicate these components and IRGCN leadership claims they’ve already succeeded.”

Manufactured by Ice Marine, the Bladerunner, sold through a structure of international transactions, ended up in Bandar Abbas, Iran’s largest port, which houses the IRGCN’s headquarters. There, the vessel was dissected, rebuilt and armed with sophisticated weapons systems. Like previous platforms, design analysis from reverse engineering procedures was used to build and commission a fleet of clones capable of executing IRGCN missions in Iran’s littoral areas in the Strait of Hormuz.

Questions were raised about Iran’s ability to copy the main performance components of the Bladerunner, specifically the twin 1,000 HP Caterpillar C18 inboard engines and Arneson ASD12 surface drives, but technical experts suggest that Iran may well have the capabilities to replicate these components and IRGCN leadership claims they’ve already succeeded. With these systems, speed alone would offer the vessels a competitive offensive and defensive performance edge, allowing hit-and-run activities to be executed with top-notch manoeuvrability.

The role of AI in the People’s Liberation Army

Comparing these activities to Iranian operations during parts of the Iran-Iraq War, dubbed the Tanker War, it is evident that the IRGCN has taken modernisation seriously. Their goal is to replace their underperforming Chinese and North Korean vessels with indigenously produced FACs to participate in ‘swarm attacks,’ a tactic in which waves of small vessels attack a larger slow capital target overwhelming it with small arms / RPG / missile fire, or even ramming it in suicide kamikaze-style attacks. Judging by aesthetics alone, the new fleet emits an air of professionalism as depicted in the box-out comparison.

These vessels can be outfitted in a variety of configurations, ranging from small arms to cruise missiles. Image analysis reveals that the majority are armed with at least one mounted DShKM 1938 heavy machine gun (12.7×108 mm, slightly larger than .50 cal), as well as 107mm or other similar rocket-launchers.

“These are radar guided anti-ship cruise missiles capable of destroying 1,500-tonne targets and damaging even larger ones.”

Iran’s missile capabilities continue to grow. In reference to arming FACs, deputy defence minister and head of Iran’s Aerospace Organisation, General Mehdi Farah, stated that the country’s “missiles have the capability of being launched from vessels with speeds of over 30 knots, and these missiles include Zafar, Nasr, Noor and Qader.” These are radar guided anti-ship cruise missiles capable of destroying 1,500-tonne targets and damaging even larger ones.

On top of this, the Iranians have imported Russian Shkval torpedoes and created indigenous clones, which they claim are outfitted on some of their FACs. These torpedoes which travel around 200 knots are a threat as many modern seaborne radar and targeting systems cannot engage surface projectiles at that speed.

Iran has already begun practicing delivery of Chinese made EM series and other devices from FACs in the Caspian in order to avoid further tension in the Gulf. Using these assets together with other conventional systems, Iran bolsters its A2/AD capabilities for control of Hormuz. Deploying mines in the strait would leverage Iran’s FAC capabilities, forcing any power to think twice about intervening in the region, let alone transiting the Strait – firstly because of the psychological deterrent of operating in a constricted mined waterway, and second for the expensive, prolonged and dangerous task of post-conflict demining.

Controlling the Strait of Hormuz

The IRGCN seeks to develop and maintain a force capable of preserving Iranian control over the Strait of Hormuz. Jumping to conclusions about coalition forces having superior defensive surface capabilities and airpower, which may be correct, unfortunately places thorough analysis of the IRGCN in the backseat. It is imperative to keep in mind Iran’s willpower and creativity and not underestimate the potential of the IRGCN, to execute spontaneous unconventional operations with its ever-growing asymmetric fleet against military or civil assets.

“The IRGCN seeks to develop and maintain a force capable of preserving Iranian control over the Strait of Hormuz.”

Though a handful of FACs can be easily defeated with a wide array of defensive technologies, including helicopter-launched over-the-horizon targeting systems, a ‘swarm’ of such craft in the triple digits would be beyond overwhelming. Populating the local maritime domain with such a saturation of vessels could render defensive targeting systems useless, as they may not be able to simultaneously monitor, let alone engage, hundreds of swarming Iranian FACs. Moreover, RoE may not be cleared to engage all targets until they are identified, pose a direct threat, and are within their own offensive range.

While the likelihood of an FAC swarm attack against coalition military vessels remains unlikely, should Iran choose to turn its FACs against even one commercial vessel, it could cause catastrophic damage, with global policy and private sector ramifications. The FACs can swiftly outmanoeuvre the civil and military traffic in this relatively narrow and confined waterway and instigate problems, ranging from harassment of military vessels as already done, to a variety of direct attacks against commercial assets in Hormuz, reminiscent of the Tanker War.

Managing director of Strategic Analysis political risk consultancy, Ruth Lux, said: “The Strait of Hormuz is the most important oil chokepoint in the world and Iran is unlikely to close it as its economy is dependent on exporting upwards of two million barrels of oil a day via the Strait. Furthermore, Iran does not want to alienate those countries which oppose broader sanctions and it knows that a closure of the Strait would result in a US-led military response, which Iran wants to avoid. Continued Iranian threats are already having a negative impact on the energy market as Iran is capable of executing damage to infrastructure and harassment of vessels without full closure of the Strait.”

While there appears to be no doubt that a closure of the Strait would be just as detrimental to Iran as to other countries dependent on energy supply from the Gulf, the IRGCN continues to reaffirm its ready ability to close the Strait of Hormuz at ease if provoked. Should a threatened Iran choose to take any A2/AD action in this strategic waterway, it would most likely come as a hybrid operation – using Iran’s FAC fleet in support of shore-based missile capabilities and rapid deployment of naval mines to restrict access through Hormuz. Using these assets together, Iran may be able to leverage its capabilities to execute a more serious and sustained A2/AD operation than commonly perceived.

Built on the Bladerunner design, known for its stability, high mobility and power, this vessel was first indigenously cloned in 2010 and then mass produced between 2011 and 2012. The original Bladerunner has a remarkable top cruising speed of 65 knots, but IRGC naval commander Rear Admiral Ali Fadavi claims his Seraj-1 vessels are modified to 80-85 knots, with later generations expected to reach a target goal of 100 knots. Images show the Seraj-1 outfitted with modified 107mm rocket launchers (11 tubes) and a forward mounted DShKM 1938 heavy machine gun, though other weapon configurations are of course possible.

These are modified versions of the fast attack craft bought in 1984 from Sweden’s Boghammar Marin during the Tanker Wars and later refitted with Seatek diesel engines and a variety of large calibre armaments, most notably over-bridge 107mm rocket launchers and forward mounted DShKM. In the mid 2000s the Maritime Industries Group, a component of Iran’s state Defence Industries Organisation, began reproducing mono and double-hull variants indigenously.

These lightly armoured, indigenously produced Iranian FACs are capable of speeds up to 70 knots. Note the twin tubes for Nasr-1 cruise missiles, as well as forward and rear mounted DShKMs.

Iran has included development of ekranoplans (sea-skimming ground effect vessels) to its FAC portfolio. The Bavar-2 is Iran’s miniature version of a ground effect vehicle design never seriously developed for military use except by the USSR. Iran has built small ekranoplans capable of high speeds over flat land as well as water. The Iranians claim this craft is ‘stealth’ due to its low profile, though specialists indicate otherwise, especially as its exposed engines will glow in thermal imaging. Moreover, IRGN leadership has stated their ekranoplans are armed with machine guns and surveillance cameras.

There has been speculation that the IRGN may use FACs for suicide missions. Some experts argue that FACs used in a suicide-style attack against multibillion dollar navy vessels would be catastrophic. Historically, however, suicide attacks have never been common operating procedure for any navy, let alone Iran, though it should not be ruled out due to increased radicalisation among the IRGC ranks. In today’s paradigm, however, remote controlled, unmanned vessels may be able to deliver a similar affect without the loss of a pilot’s life. Iran has developed the remote-controlled stealth Ya Mahdi, a high-speed unmanned and radar-evasive vessel to do just that.

Elefsis Industrial Enterprises SA has been awarded the contract for the supply of three Super Vita 62m fast attack missile craft for the Hellenic Navy.