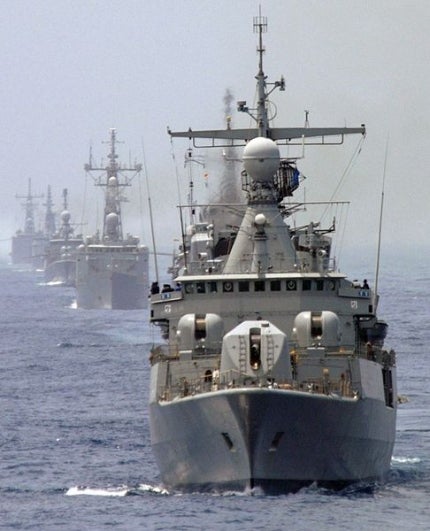 On the morning of the 2 April 1982, the task of defending Port Stanley against a 600-strong Argentine invasion force fell to a British contingent of just 80 servicemen – 68 Royal Marines and 12 sailors from the ice patrol ship HMS Endurance – along with a handful of local reservists.

“A recent report from Strategic Defence Intelligence predicted that Argentina’s defence budget will see a compound annual growth rate (CAGR) of 15.87% over the period from 2011 to 2015.”

Thirty years on, and today’s military presence is rather more substantial. Three Royal Navy vessels, a patrol ship, an auxiliary support ship and either a frigate or a state-of-the-art destroyer – such as the Type 45 anti-aircraft destroyer, HMS Dauntless, recently sent to the South Atlantic – guard the sea lanes, bolstered by the rumoured presence of a conventionally armed, nuclear-powered submarine.

While Argentina’s Navy played a very small part in the fighting by comparison – and almost none at all after the subsequently much-debated sinking of the ARA General Belgrano – examining the current maritime power of the two combatants offers some interesting insights into how military spending has shifted over recent years.

According to the latest SIPRI Military Expenditure Database, during the era which included the Falklands conflict, Britain’s military budget represented around four percent of GDP – something which the conflict itself helped to increase.

Defence reviews are not a new phenomenon, and the UK’s spending had been the subject of major cuts during the late 1970s, which, ironically, would have meant that a number of the vessels involved in the war would not have been in service if Argentina’s military junta had delayed the decision to invade by a few months.

Today, cuts are once again on the agenda, with defence spending now accounting for 2.7% of GDP and, in the wake of the Strategic Defence and Security Review, they are to face a five percent reduction – £1.72bn in real terms – by 2013/14. Nonetheless, Britain’s military budget still ranks fourth in the world.

Argentina, by contrast, languishes down in 49th place – but that sort of rather simple comparison does not begin to tell the real story. While here the SIPRI figures also show the proportion of GDP spent on defence has fallen slightly – from 1.4% then to one percent today – that masks the increase in actual cash terms driven by the growth in the country’s economy.

A recent report from Strategic Defence Intelligence predicted that Argentina’s defence budget will see a compound annual growth rate (CAGR) of 15.87% over the period from 2011 to 2015, reaching a final total of $5.5bn. In respect of the Argentine Naval allocation, the authors forecast it will increase from the average of 25.3% of the country’s total defence budget between 2006 and 2010, to 25.5% over the years to 2015. 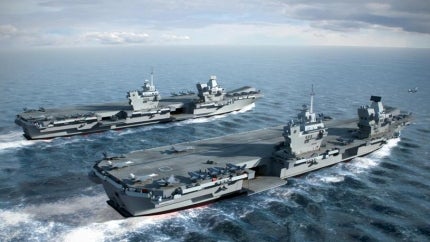 An artist’s impression of the HMS Queen Elizabeth and HMS Prince of Wales at sea.

“Should a similar need arise today, the upsurge of ‘flags of convenience’ might see HM Government looking to charter foreign ships.”

Today, the like-for-like comparison sees Britain carrierless – and left reliant on helicopter carriers for some years to come – with just 18 active major surface combatants, comprising of five destroyers and 13 frigates.

In addition, there are two landing platform docks and a total of 11 nuclear powered submarines, of which four are ballistic missile submarines and the remaining seven are conventionally-armed, fleet submarines. A further seven vessels are currently being constructed – the two Queen Elizabeth-Class aircraft carriers, the last of the Type 45 destroyers and four Astute-Class submarines.

Apart from the loss of fixed-wing carrier capability, arguably the biggest potential change in British maritime muscle post-Falklands, however, lies in the drastic reduction of merchant vessels sailing under the British flag. In 1982, requisitioned ships accounted for nearly half of the task force. Should a similar need arise today, the upsurge of ‘flags of convenience’ might see HM Government looking to charter foreign ships.

Argentine’s core fleet at the start of the Falklands conflict was comprised of six destroyers (two of them Type 42s), three corvettes, one cruiser, one ex-Royal Navy Colossus-Class carrier (the former HMS Venerable) and two submarines (one a modern Type 209, the other a WWII vintage Guppy-type).

Perhaps the most curious fact to emerge from the comparison is that, despite the war comprehensively demonstrating the value of close air support – and the awful vulnerability of its absence – both nations have to a large degree turned their backs on naval air-power, at least for the moment.

Just how long the current situation is allowed to persist, where each navy’s pilots have to depend on their respective allies’ carriers for deck space, remains to be seen. 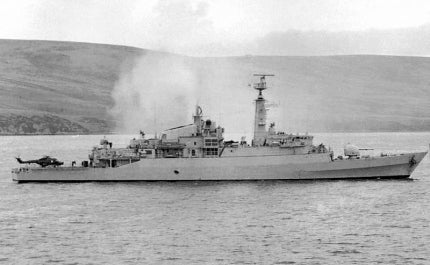