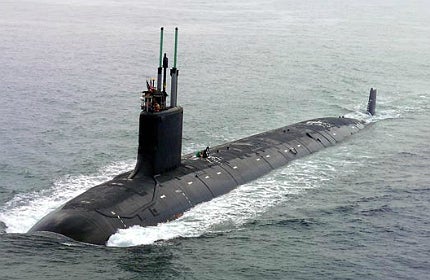 Submarine communication is restricted by the depth at which vessels can exchange information and the speed at which they can do so through the medium of water.

Recently however, researchers have made impressive strides in solving this dilemma using a technique called Quantum Key Distribution (QKD).

QKD promises to guarantee secure communication through the principles of quantum mechanics, without sacrificing speed or forcing the submarine to rise nearer the surface.

Companies Intelligence
View All
Reports
View All
Data Insights
View All
“Submarine communication is restricted by the depth at which vessels can exchange information.”

For a submarine to retain all its tactical advantage, it must remain submerged in the mixed layer, which is around 60 to 100 metres deep, below which surface sonars cannot detect them. Submarine communications are currently carried out while submerged using ELF or VLF radio waves because only very low or extremely low frequencies can penetrate the water at those depths.

Using ELF and VLF presents a number of disadvantages, however. The transmission sites have to be very large, meaning the submarine must tow cumbersome antenna cables, plus it usually has to align on a specific orientation and reduce speed to obtain optimal reception.

The VLF and ELF frequencies only offer a very low bandwidth: VLF supports a few hundred bits a second while ELF sustains just a few bits each minute. This prevents the transmission of complex data such as video.

One potential solution is to carry out optical communications using a laser, a concept which has been around since the 1980s when experiments were carried out to demonstrate that it is possible to maintain an optical channel between a submarine and an airborne platform.

The Quantum Technologies group at defence technology specialist ITT Exelis is looking at taking this a step further through research into the feasibility of laser optical communication between a submarine and a satellite or an airborne platform, secured by using quantum information.

The work ITT Exelis carries out for the US Government includes research in a wide variety of quantum information topics, including the development of quantum algorithms, quantum sensors and novel solutions for quantum communication systems.

Dr. Marco Lanzagorta, the director of the Quantum Technologies group in the Information Systems department of ITT Exelis, explains that QKD is a protocol which uses quantum information to generate a pair of perfectly secure keys. 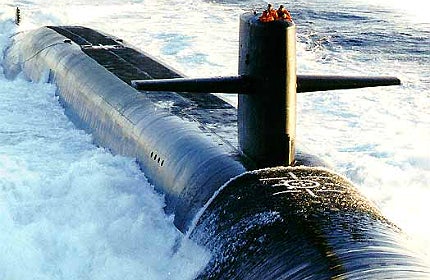 Quantum information has two important properties for securing communications. It cannot be copied which means it cannot be forged, and every time a quantum state is measured by an observer it gets collapsed, which means its properties are very difficult to detect.

“QKD promises to guarantee secure communication through the principles of quantum mechanics, without sacrificing speed.”

Combined in QKD, these properties can be used to generate perfectly secure keys because the secrecy of the keys is guaranteed by the laws of physics.

Lanzagorta explains that in traditional cryptosystems – such as the public domain system RSA, Diffie-Hellman and ElGamal encryption methods – the security is based on the solution to a very hard mathematical problem.

However, there is no formal proof that this mathematical problem, for example prime factorisation in the case of RSA, could not be broken by an advanced algorithm.

It has also been conjectured that hypothetical quantum computers could break these types of ciphers exponentially faster. Hence QKD would offer an unbeatably secure solution.

The technology for QKD already exists and is commercially available but it is currently carried out through an optical fibre, rather than photons travelling freely through air or water.

“Some experiments have been done on QKD using photons moving in free space,” said Lanzagorta. “Most recently an experiment was done in the Canary Islands where they did first base QKD at a distance of 144km, showing it is feasible to have this free space quantum communication.

“Combined in QKD, these properties can be used to generate perfectly secure keys because the secrecy of the keys is guaranteed.”

“Other work has been done on connecting a ground site with a satellite platform, but we’re working not on a ground platform but on one that is submerged in the water.”

In addition to the challenges of transmitting photons through water and free air, the researchers need to establish a laser link between the transmitter and a receiver on a satellite or airborne platform.

This is currently being tackled by a QinetiQ North America team which is developing a specialist tracking system.

Once the optical link between the submarine and the satellite is established, the ITT Exelis researchers’ work takes over, investigating how to enable the QKD protocol to secure communications. This is done using a photosensor working in what is known as the Geiger mode, which effectively means it counts photons which arrive in a certain polarisation.

“For the transmission of quantum information, you need something that will polarise the photons, so the quantum state will be in a given basis, and to have a filter that detects this in the transmitter and receiver,” said Lanzagorta.

“You cannot use regular lasers as you need specialist photon lasers, which is like a very diluted laser. These send one photon at a time and each photon has a well-determined quantum state.”

The next stage for the programme will see the US Naval Research Lab carry out a series of experiments to establish how well a photon’s quantum state is preserved as it travels through water to verify the accuracy of ITT Exelis’ theoretical feasibility study.

If the experiments support the theoretical model and the research moves on to the next stage, an experimental prototype could be in place within five years. However, a number of factors are at play with such a radical new approach.

“It’s not only a scientific technological question but also has to do with funding levels and politics,” claimed Lanzagorta. 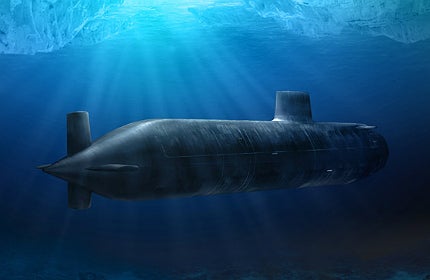 However, if the powers that be do see it through, the benefits could be substantial. The proposed system could potentially deliver perfectly secure transmission, the highest level of security available, at rates of up to 170kb a second, which is around 600 times more bandwidth than current VLF systems are capable of, easily coping with complex data such as video.

Additionally, there would be no loss of operational efficiency or stealth for the submarine itself, as in principle it would not have to slow down, remain at depths of less than 100m or change orientation to exchange data.

These factors would be addressed by the transmitting laser and receiving system part of the solution, which is being tackled by QinetiQ.

However, the entire success depends on how travelling through water affects the photon. “The biggest challenge is to see what is the best way to send the single photon pulses in such a way that the quantum state is protected even if it travels through water,” said Lanzagorta. “We need to find a way to do some sort of encoding, like error correction encoding, that protects the quantum state of the photon so we can have a larger range of operations.”