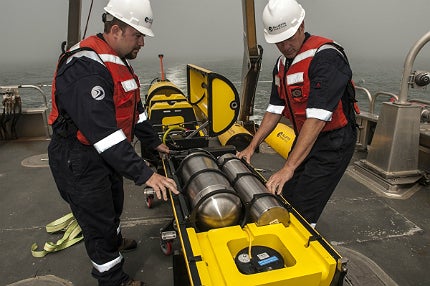 In recent years AUV technology has slowly been catching up to the operational requirements that are demanded of them. This has been largely due to the efforts of some of world’s leading naval scientists and engineers who are working tirelessly to evolve autonomous underwater vehicle (AUV) technology.

Many in the industry believe we are just a few years away from technology which can rival the importance of unmanned aerial vehicles (UAV).

To get to that point significant challenges must still be overcome, including vehicle manoeuvrability, power restrictions, autonomous system integration and cooperation between underwater systems. Organisations, including the US Office for Naval Research, the Defence Advanced Research Projects Agency (DARPA) and Nato have been working alongside commercial and non-commercial parties to address these issues.

Now, those years of efforts may be about to pay off.

"Many in the industry believe we are just a few years away from technology which can rival the importance of UAVs."

"We’ve achieved the goals of the phases as we’ve been working our way through them," said Bluefin Robotics CEO and Chairman David P. Kelly.

"The relative speed in which we’ve been able to integrate some of the capabilities and prove them out has gone very well. Probably better than expected."

"The next phase is looking at testing the vehicle integrated with the sensor and the autonomy. We are in phase three of the contract and that phase is focused on the full integration of the sonar into the vehicle, as well as the production of a second system to demonstrate networked operations," Kelly added.

Bluefin Robotics and other manufacturers are working on systems that can operate at depths unthinkable for manned platforms.

This capability is essential for detecting submarines overhead, which is one of DARPA’s main design criteria and one which Bluefin has worked closely on.

"The core pieces [for DSOP] were the depth, diving down to a 6,000 metre system, and then extremely tight buoyancy control at depth and also a power management technique to enable low power consumption to increase the endurance of the vehicle," explains Kelly.

Bluefin are also working alongside General Dynamics Advanced Information Systems on the US Navy’s Knifefish AUV project. The Knifefish is a derivative of Bluefin’s successful Bluefin-21 vehicle and is due to enter operational service in 2017.

Significantly, it will be replacing the mine-detecting dolphins and sea lions that have made up the Marine Mammal Program for the last 50 years.

Despite the innovations that companies such as Bluefin Robotics have been able to achieve, endurance remains a challenge. "It’s not to the degree we’d like," admits Kelly. "[The US Navy] would like missions approaching a week to enable the platform to work independent of the host platform. Those things are a little beyond what is capable today."

But Kelly sees a time in the near future where platforms are robust and reliable and perform multimonth missions. In ten years, Kelly predicts the transition from a proof of concepts system to operational capability and asset will be fully complete.

The anatomy of autonomy innovation

On 5th August DARPA consulted with industry over proposals for a new AUV project called Hydra. According to DARPA’s solicitation the vehicle would provide a "novel delivery mechanism for insertion of unmanned air and underwater vehicles into operational environments." This ‘mothership’ programme will mean a greater reliance on autonomous systems to carry out advanced new missions.

"Bluefin Robotics and other manufacturers are working on systems that can operate at depths unthinkable for manned platforms."

Evolution of autonomous software has been vital to overcome the problems associated with communicating underwater and navigation. UAVs and remotely-controlled ground vehicles have the benefit of being human-operated often from thousands of miles away and in real-time, but this is not possible for AUVs.

"The environment is really critical and that’s where we are physics limited," explains Professor Henrik Schmidt, director of the Laboratory of Autonomous Marine Sensing Systems (LAMSS) at the Massachusetts Institute of Technology (MIT). "The operational paradigm that we are using for underwater networks are completely different from what we are dealing with in the atmosphere."

Researchers at MIT have had to find ways in which vehicles can travel underwater with a limited amount of human interaction. They recently demonstrated a system that enables AUVs to automatically adopt new behaviours when responding to environmental sensory input.

This payload autonomy, or ‘backseat driver’, is platform independent and can be used in different types of AUVs for various missions, all without changing the software. "We can buy an off-the-shelf vehicle and use it for a wide range of missions because the autonomy system is attached to the payload," Schmidt says. "We are highly portable."

This is the result of developing a software infrastructure known as mission orientated operation suite (MOOS). The MOOS project, which is sponsored by the US Office of Naval Research, has recently started using a plug-and-play autonomy module called Gumstix, which acts as a removable memory drive for AUV vehicles.

MIT have also contributed much of their work to DARPA’s DSOP programme. "We present the acoustic environment and the oceanographic environment very accurately on-board, combining sensor data with modelling and then use that in the decision making," said Professor Schmidt. "Five years ago we didn’t have the possibility of putting these kinds of models and predictions on board the vehicles, computer technology wasn’t small or efficient enough."

With the Gumstix module and MOOS, it is possible to install an autonomy system in any off-the-shelf AUV. Recent testing with a Bluefin vehicle has involved replacing the standard Removable Data Storage Module (RDSM) with a Gumstix unit. The payload software then communicates with a laptop, which creates a simulation environment representing realistic dynamics and sensory input.

Professor Schmidt predicts the next big innovation will be multiple AUVs working collaboratively rather than as single units. But here again, communication will be a big issue: "We have to learn how they can operate as a team to be competitive with the traditional platforms," says Professor Schmidt.

"Researchers at MIT have had to find ways in which vehicles can travel underwater with a limited amount of human interaction."

Research into cooperation between AUVs is already underway across the Atlantic at Nato’s Centre for Maritime Research and Experimentation (CMRE). CMRE, which is based in Italy, has been working with its European partners to create a system of AUVs that communicate through acoustic modems in an underwater wireless network. The result is an system composed of multiple, heterogeneous marine vehicles which cooperate to perform a mission.

One of CMRE’s main goals is working on standardising communications to create a common set of protocols when working with Nato members’ AUVs. The hope is to have underwater connection that is up to the standard of WIFI, says CMRE’s deputy chief scientist Dr James H. Miller.

Sea trials of the Marine Robotic System of Self-Organising, logically Linked Physical Nodes (MORPH) project were carried out in July. A consortium of 32 scientists from five countries and another eight research organisations successfully demonstrated coordinated manoeuvres between autonomous vehicles (two underwater and two surface) in a diamond shaped formation.

Collaboration is significant in operations such as ASW because of the low speed of AUVs compared to manned submarines. "We’re like policemen on a slow motorcycle trying to catch a fast car. So we have to have a number of vehicles down the road waiting to catch the submarine," says Dr Miller. Scientists are developing ways UAVs can detect a submarine, track it and then communicate that information to a sister vehicle, which can repeat the process over distance.

CMRE is working closely with Nato’s Allied Maritime Command (MARCOM) based in Northwood, England, and Allied Command Transformation to speed-up the AUV transition from concepts to operational capability.

The innovations witnessed in recent years in vehicle technology, autonomous software and underwater communications could well create an effective capability with less risk and cost associated with manned platforms. In particular, the cost of an unmanned vehicle will be significantly less than what is currently invested in manned platforms.

With developers close to an effective AUV capability for ASW and mine clearance operations, what comes next? Navies are taking notice of AUV capabilities as they develop and once they are deemed effective, may soon develop counter-AUV technology. As CMRE’s Dr Miller predicts: "It’s the classic offence and defence in military warfare history, you come up with a new offence and defence adapts quickly."

Recent advances in AUV technology and their imminent inclusion in naval operations may mean we see these counter-measures much sooner than originally thought.